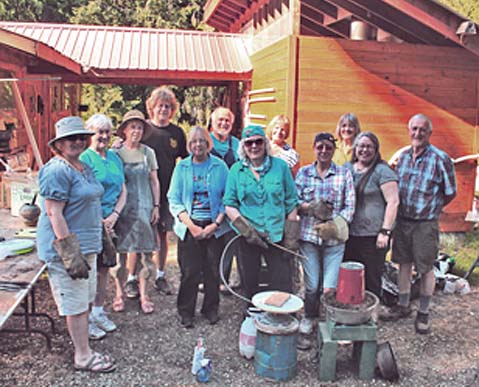 If a group of crows is a “murder of crows” and a bunch of geese is a “gaggle of geese”, we think that a gathering of potters should be called a “pride of potters”.
The Pride of Potters series started in 2006 to give OKPA potters a chance to meet each other in their creative environments. One or more potters hosts a gathering of potters in their own studio and shares potting techniques and resource information. These events are like mini pottery workshops. They are a great way to get to know fellow potters and exchange ideas.
Contact Lynda Jones if you would like to attend the next ‘Pride’.

2014 Pride of Potterswas held at Stephen Plant’s picturesque acreage and studio near Enderby. On Thursday June 19 a few members met at Stephen’s studio to assist Stephen and James Hibbert to glaze and load bisqueware pieces into the gas kiln. On Friday the kiln was fired up and it had cooled enough to open on Sunday when the remaining members joined Stephen and James for the opening of the kiln. As always there were some successes and failures and lessons learned for next time.

Throughout the day we did two different Raku type firings….a flash firing where unfortunately the glass bowl blew up but we got to see a bit of results….and an Obvara firing where the unglazed red hot pot is taken from the kiln, dunked in bread dough and then quenched in water. See Up In Smoke Pottery for this Eastern European firing method.

Scroll back to top